Baby James has had issues from day 1. He was born in horrible rainy weather up on the mountain. He was such a large baby we think he was brain damaged at birth from being oxygen deprived (it's called dummy calf syndrome). His mother's nipples were huge and long and he didn't know how to nurse them. After hours of observing and trying to help him nurse to no avail, we finally brought him inside.

Baby James didn't get his mother's colostrum so his immune system has been very weak (we tried to milk his mom to get the colostrum for him but she wouldn't let us near her. We used store bought but it's not the same). He was unable to suck so he was fed through a tube for quite a while and he battled scours and coccidia.

(Our dogs adoped James and took over the duitys of a mother, loving and cleaning him. Their love and acceptance gave him a will to live)

Around a month old we thought he was finally out of the woods since he finally learned to take a bottle. He appeared to be doing ok and was active and didn't have any signs of a life threatening infection. He is so fuzzy we couldn't tell his navel was abnormal. Since it is right next to his penis we just assumed whenever it was wet it was just pee had splashed on it.

(Baby James when we thought he was finally improving. He lived with us indoors for around 3 weeks)

(Wearing homemade shoes so he won't slide on the slick floor)

When James was around 1 month old we had our vet Dr. Jornigan castrate him. He had to shave James belly, he discovered that his navel hadn't closed off and he was urinating through it and there was infection. (We castrated him because intact bottle fed bulls usually turn on humans when they reach sexual maturity because they consider them a threat for a mate and we didn't want that to happen)

Dr. Jornigan informed us that we could do surgery on the navel or we could attempt to chemically cauterize the navel (along with antibiotics) and maybe it would heal on its own. Since he seemed to be healthy and the surgery would be risky we decided to try the less invasive procedure. It appeared to be working since the navel was slowly closing up and he was active and eating good.

After 10 days of attempting to chemically calderize the navel there was only a small opening left but it wouldn't totally close up. Dr. Jornigan thought it would be a simple procedure and he could just cut in there and remove the dead navel tissue and sew him up. Worst case he thought the infection may go all the way to his bladder. (We thought the biggest risk during surgey is he could throw up while laying on his back and that could kill him)

When Dr. Jornigan started cutting away the dead tissue he discovered the whole umbilical cord was abscessed all the way to his liver. He couldn't remove the dead tissue because so much was dead and infected, James would have bled to death. His organs were stuck to the umbilical cord and the cord was about to rupture and fill his bloodstream with infection which would have killed him. When Dr. Jornigan recommended putting him to sleep it was because he thought he was going to suffer and die slowly. He wasn't giving up on him, he just didn't want Baby James to go through any unnecessary suffering. Since Baby James had fought through so much already we wanted to try anything we could to save him. Dr. Jornigan had no instructions on what to do since to his knowledge this had never been done before. He had only ever seen infections like this on dead animals being autopsied (they never survived as long as James, so there wasn't ever the opportunity to perform a surgery like this).

Dr. Jornigan made a way for the liver abcess to drain and left the mass of abscessed umbilical tissue sewed on the outside of his body. He said in theory it should work but he didn't know because it hadn't been done before. He also put him on multiple antibiotics. For over a week we squeezed his belly daily to drain the infection. We gave him multiple shots a day and cleaned the wound. It was very painful for him.

When Dr. Jornigan came to check on him, he found the remaining part of the umbilical cord was living tissue and the infection was gone. He cut away the protruding dried up mass of umbilical tissue and it was healthy tissue under his belly. It started closing up and healing on its own without being sewed together.

(photo is Baby James saying please No I'm so sick of all these shots. Adam and Dr. Jornigan get to be the bad guys and give all the shots and medications. Thankfully I get to be the good guy and just feed him.)

We attempted to reintroduce James to the herd but by this point he was an outcast. The other cattle thought he was odd and ignored him or bullied him. We knew he would soon outgrow his doggy friends and needed a buddy (they are herd animals and are unhappy without a companion). We found him some orphan babies as companions. Since they were also orphans they accepted James (even though he sometimes wears funny costumes). They bonded right away.

(Baby James, Little Girl, and Judith in back)

We attempted to reintroduce James to the herd but by this point he was an outcast. The other cattle thought he was odd and ignored him or bullied him. We knew he would soon outgrow his doggy friends and needed a buddy (they are herd animals and are unhappy without a companion). We found him some orphan babies as companions. Since they were also orphans they accepted James (even though he sometimes wears funny costumes). They bonded right away.

(another hernia photo right before surgery)

We are hoping and praying the surgery goes well and James will finally be able to live a normal life (well as normal life as a world famous bottle calf who thinks he's a dog can live). This little guy has brought joy to so many people's lives and is such a trooper!

Thanks for all the prayers and support. Baby James came through surgery. It took around 2.5 hours. He gave us a scare when he stopped breathing and his heart stopped for over 2 minutes! Feeling his little body go cold was the most terrifying experience. Thankfully the vets were able to resuscitate him quickly (Along with all the prayers!). I wish I could have gotten photos of the little guy getting CPR, it was pretty amazing to watch them bring him back.

He still had a mass of infected tissue inside which they removed. Dr. Jornigan & Megan from Foothills Mobile Vet in Marion, NC & Dr. Jenna Adams (from Animal Hospital of Marion, NC assisted in surgery) did an amazing job. He is still in a lot of pain and on lots of drugs and antibiotics but he's eating and standing up now. He has to be isolated from his friends for 2 weeks as he heals but hopefully soon he can be running and playing with his girls.

James after surgery with his belly band

It is nearing James' first birthday. He is doing great. He is a happy healthy calf. We have added a few more orphan babies to the gang and James is their leader. He no longer acts like a dog (he just acts like a big spoiled cow). He is an amazing little guy and his story is inspiring people across the globe.

James with Tiny Tim (I'll make another post with his story), Little Girl, and Noelle hiding in the background

A few people have asked if we have a wish list for the farm for things the babies can use. We created an amazon one if you do want to help feed the little ones Amazon Wish List

Please read before contacting about a calf 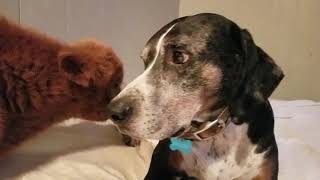 Please read before contacting about a calf